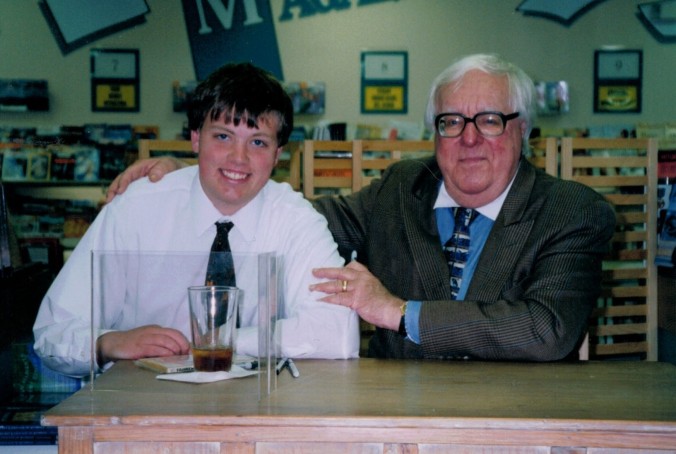 There have been numerous authors who have inspired my writing, but perhaps one of the greatest influences, aside from Tolkien, has been Ray Bradbury.

I was in high school when I picked up a copy of Ray Bradbury’s Fahrenheit 451. I was in 10th grade, to be precise. We had to write a paper on a classic piece of literature. This wasn’t something that I was looking forward to. I had to find a book that would really pull me in. Out of the list of suggestions that the teacher gave us, I found myself saying more than once, “Boring,” “boring,” “boring.” Until finally,  “Hello! What’s this?” I had found that diamond glittering amongst the dusty coal. It was Fahrenheit 451 that grabbed onto my imagination right when I read the brief synopsis. A dystopian society in which books were banned and burned! I couldn’t fathom such a society. My curiosity was kindled greater than the fire that the fireman kindled within the novel to burn books. I went to the school library and picked up a copy. Little did I know how much this book would change my life.

From the start I was hooked. The smell of the kerosene, the heat of the fire, the pages of the books burning in a bonfire took me to a world that could frighteningly come to pass. Truth be told, it was too real for comfort. While it’s true that government wasn’t – nor are they still – paying firemen to burn books, there were other aspects of this dystopian novel I related to and that I still do. This book prophesies about a hedonistic society that would rather be involved in interactive games and reading lists of brief useless trivial facts that don’t encourage any critical or analytical thinking; kind of like those lists on the internet that give random facts. In short, a society that didn’t like books and a society that took offense at everything!

It should be noted that before this, while I occasionally liked to read I wasn’t the voracious reader that I am now. As a child I loved Dr. Seuss and I still do, and as preteen I loved the works of Tolkien and I still do. But Bradbury taught me to see value in all sorts of literature. It’s not an exaggeration by any means to say that Fahrenheit 451 transformed me from a typical teenager to a young philosopher and scholar. With that one novel he initiated me into an exclusive world of thought. To this day, I see people oblivious to the world around them, being more keen on hedonistic and simple pleasures rather than the pains of rigorous thought. I see people who are just as superficial as Montag’s wife Mildred, who glory in their own ignorance. I see moral policemen both on the Baby Boomer side and the Millennial side who want to censor free speech and ban whatever they disagree with much like the novel’s fire chief Beatty. There was no going back. I had taken of the fruit of knowledge in the form of a novel and my eyes had been opened. Still, I wouldn’t go back even if I could.

As a new Bradbury fan, imagine my surprise when he was scheduled to attend a book signing at Page1, the local bookstore of my hometown. There was no way around it. I had to put my other plans on hold to meet him.

I arrived at the bookstore without any book for him to sign. The only copy of Fahrenheit 451 I had was from my high school library, and I couldn’t very well have him sign that. So I did what any teenager who didn’t have much money would have done. I begged my dad to buy me a nice hardback cover of the novel. 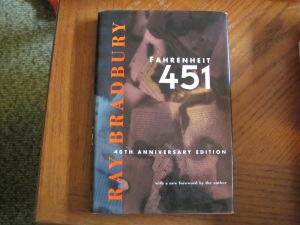 After that, I don’t remember what Bradbury said or if I had gotten there after he did a reading. It’s all vague to me now. However, I do remember the feeling of excitement of standing in the presence of a master storyteller, a modern day bard.   This man was a poet who could write words to awaken longing that lay dormant in the human soul. Furthermore, he was a prophet crying out in the wilderness, preaching the dangers of censorship, hedonism, and book banning. He was an oracle predicting the dangerous future of robotics, mindless interactive entertainment, and a society who learns brief facts, but not how to critically think (Again, think random lists on the internet). And yet, at the same time he was just an average man, a friendly man, someone who could be your next door neighbor.

He thanked me for praising his book, signed my copy, and allowed me to have a picture taken with him with his arm around me. I couldn’t believe it. I was important enough for him to put his arm around me like a long lost friend.  When I asked if I could give him a call, he was even gracious enough to give me his number and told me to call him at this time. Talk about class! I was that important. I’m sad to say something came up and I missed that opportunity to talk with him over the phone. But it doesn’t matter. I got to meet him. I got my photo take with him. I got my book signed.  I will always cherish that moment.

Since then I have fallen in love with Bradbury’s other books. I have traveled with and lived on the desolate planet of Mars, seeing the rise and fall of civilizations within the pages of The Martin Chronicles. I have magically relieved childhood in delicious and wonderful terror, traveling through the history of Halloween in The Halloween Tree. I have blasted to outer-space, experienced everyday magic, and mingled with androids in his collections of short stories. I hope that in the future I can be be half as talented as Ray Bradbury, who was more than just an author, but one of my mentors.