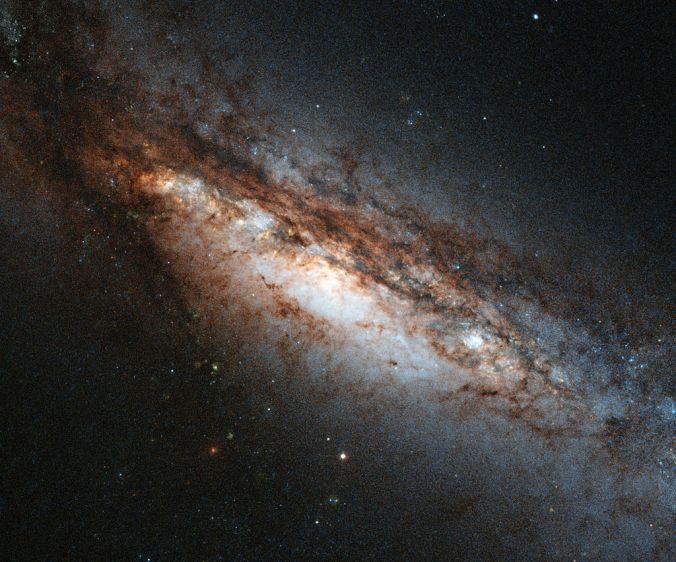 Image taken from the Hubble telescope, gotten off of Wikimedia Commons.

A science fiction short story that I’m working on about androids and what it truly means to be human. Does the first part of the story not indicate that? Don’t worry. The second or third part will.

“Hurry! There isn’t much time,” my mom was pulling me by her right hand and my six year old sister Nabiki by the other.

It was hard for me to keep up. Not only was I small by the standards of a thirteen year old, but crowds of people were pushing and shoving. I was worried about being trampled upon by the mad rush of the crowd trying to get to the rocket. Still, despite my annoyance, it was hard for me to be angry at anyone.

Time was of the essence. My mom had flown us out a week prior to Mexico City in order to make sure that we could board the rocket before the destruction happened. An asteroid was rapidly approaching, a harbinger of death. The collision course had been predicted a year in advance, but that year wasn’t enough to construct spaceships for everyone. Only a few shuttles had been built and only a small population of people from all over the world could board them. My father had been a brilliant scientist at the University of Tokyo. He had discovered ways to recycle oxygen using greenhouse plants aboard spaceships for long voyages. It was greatly in part of him that my mother, sister, and I were given priority aboard one of the three ships. Sadly, my dad would not be joining us. Cancer got him. All those years of smoking did him in, combined with the stress of his job, I tend to think. But his death did not negate our assured passage on the Pilgrim.

It loomed before us. The Pilgrim was a massive ship that looked more like an early 20th century Zeppelin than it did an actual rocket ship. Its rotund body gleamed silver from the solar panels that were laid over it. At the back of the ship were rockets as huge as the base of a building and thirty feet tall. But what was most interesting was this large glass dome near the top of the ship. I couldn’t imagine what it was for.

“Are you Jun Tanaka?” asked a guard at the ramp in Spanish.

“Yes, that’s right,” my mother said in perfect Spanish. “And these are my children Nabiki and Takeshi.”

“We’ll need to verify.” He took out a scanner and scanned my mom, my sister, and I. “You’re good to go,” he said, after the scanner located our chips. “Welcome aboard, Senora Jun Tanaka. It’s a pleasure to have you. Hasta luego.”

The escalator took us up to the Pilgrim. A hatch was open and we found ourselves in an airlock with a group of people. All of the metal flooring and steel beams made me think that I had entered a cell instead of a new home. Among the side walls were all manner of robots and robotics, not yet activated.

A man stood before us. He carried himself tall and proud. He wore a white buttoned uniform, pressed black slacks, and had a cap on his head. “Buenos dias, everyone,” he said, jovially. “I am Captain Fernandez. Welcome aboard the Pilgrim. I hope you will all feel at home here.”

I don’t remember verbatim of what he said. But I remember the gist of it. He told us not to worry. That we were in good hands, that he had piloted many starships before, and that together we would find a new home. If not, he reassured us that the ship had all the comforts of earth life. I certainly didn’t feel such comforts at the time with the airlock being my first view.

Also it went without saying that I was already mourning for my friends and extended family. Though the asteroid hadn’t hit yet, they were as good as dead, and there would be very little the shelters could do to protect them. Particularly, I thought back to my best friend Hiroshi and how growing up we would alternate between exploring the mountains around Hyogo to wasting an evening away at the arcades. Those days would be no more. I would live while he would die. It wasn’t fair. It wasn’t right. What made the thousands of people on board with me and the people on board the other two ships more important than the millions of people worldwide being left behind? Aside from rank and prestige, I still can’t figure it out. For did not the person who worked as a janitor or the person who worked as a cook matter as much as the doctors, scientists, and artists? While I was aware that many of the people who boarded with me did much to advance the human species as a whole, did not the fry cook who spent every evening of his life helping out friends and family matter just as much? How many people must one benefit to be considered important? One life, two lives, ten lives, one hundred lives, a thousand, a million, a hundred million? Even today I don’t have an answer and I don’t think anyone should have to play the part of God in deciding.

Captain Fernandez was right about the ship though. He gave us a tour of it, and it was more than the airlock with its robots. The first room we saw was a sort of dining room, if it could be called such. A polished white floor spread before us, glistening under equally white light. Rows of tables and chairs were attached to the floor. There were lunch counters where we would order our food. Behind the counters were cabinets filled with alcoholic and non-alcoholic beverages. We were told by the Captain that there wasn’t any danger of running out of food or drink on the ship, and that he would show us why in a moment.

The next things on our tour was the theater that played movies and hosted stage plays. It was built to look like one of those early 20th century theaters, with bright red curtains and paintings and designs etched into the stage and surrounding walls. Next was the library, overflowing with books. While it was true that the ship had books digitally available, the great minds – my father perhaps being one of those who offered input – had decided that it was best to have physical copies as well. Next we were shown to our living quarters. Here a maze of halls spread out before us. We would soon learn that our dorms would not be very big. They would be tight, or cozy, depending on how one looked at it, with only a few beds, a TV that piped in hundreds of thousands of shows and movies from earth, some dressers for clothing, and a bathroom and shower. But such rooms would suffice.

The last part of the ship we saw answered my earlier question about the bubble dome, as Captain Fernandez took us up an elevator shaft and into a spacious garden in the middle of the ship. On one end was a small wood of trees of pine, juniper, and aspen, with a trickling waterfall coming out from a crevice of rocks, leading into a small stream. Flowers further added colors to these woods. The other portion of the garden were the essentials, in which fruit trees, fruit bushes, and vegetables of different climates grew. To help the trees grow were varying degrees of heat lamps hanging above them. Already this was my favorite part of the ship. It was here that the Captain told us that barley was grown for bear, grapes for grape juice and wine, and fruits and vegetables for food. Although, he hadn’t needed to tell us that, it being obvious.

The rest of the ship we weren’t privy to, it being labs where scientists and engineers manufactured meat from cells for food, and created water from oxygen and hydrogen atoms in explosion proof rooms. The other rooms were the mechanical rooms where the mechanics worked, along with the bridge.

We were assigned to our quarters as the ship took off. I sat with my mom and Nabiki, the three of us cuddled up in the already cramped quarter conditions. We could hear the rockets ignite. They were loud like a class five earthquake. The lift off wasn’t intense like I feared. I felt slight movement and that was it. The asteroid was hurtling toward the earth at a rapid pace. The next day was the day it made impact. I looked out my window and said goodbye to my friends, my teachers, my neighbor, my extended family as I saw the earth shatter. As I said my goodbyes, Nabiki started to cry. She had everyone reason to. We all did. There was no question then that I was leaving behind the sunlight for the darkness of space. Little did I realize that the darkness of space wouldn’t be the worst darkness I would face.